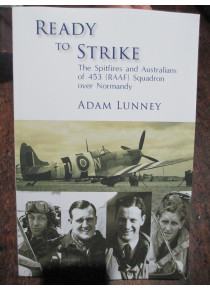 Ready to Strike the Spitfires and Australians of 453 Sqd RAAF

Ready to Strike the Spitfires and Australians of 453 Squadron over

Ready to Strike is the story of the only Royal Australian Air Force squadron to operate from airfields built immediately behind the front lines of the Normandy battlefield after the landings in France of June 1944.

453 (RAAF) Squadron was a 'for war only' formation. Ready to Strike covers the period from the Squadron's formation in May 1941 to the end of the Normandy campaign in August 1944.

This group of men were bonded by war and their love of flying. There are moments of excitement, pain, suffering, fear, boredom and laughter.

The experiences and operations of the squadron are presented in detail, using many quotes from the pilots and data from their logbooks. The book is fully referenced with chapter end notes and a bibliography.

The Australians were in Normandy too - this is their story.