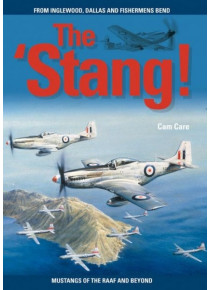 Mustangs of the RAAF The 'Stang !

The Stang! by C. Care

Regarded by most as one of the best fighters of WW2 . The Mustang had extra long range and superior performance to the earlier World War II great fighters the FW 190 and Spitfire. The RAAF operated a total of 499 Mustangs, 200 which were manufactured in Australia by the Commonwealth Aircraft Corporation.

The Stang! by Cam Care is a detailed history of the Mustang in RAAF service and beyond. The book is lavishly illustrated with over 500 black and white and colour photos, some of which have never been published before. Specially commissioned colour profiles by Graeme Molineux supplement the text showing the various colour schemes worn by the Australian Mustangs in both military and civilian use.