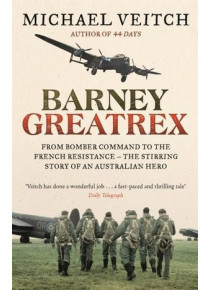 Story of Barney Greatrex an Australian with Bomber Command WW2

A school and university cadet in Sydney, Barney Greatrex signed up for RAF Bomber Command in 1941, eager to get straight into the very centre of the Allied counterattack. Bombing Germany night after night, Barney's 61 Squadron faced continual enemy fighter attacks and anti-aircraft fire - death or capture by the Nazis loomed large. Very few survived more than 20 missions, and it was on his 20th mission, in 1944, that Barney's luck finally ran out: he was shot down over occupied France.But his war was far from over.

Rescued by the French Resistance, Barney seized the opportunity to carry on fighting and joined the Maquis in the liberation of France from the occupying German forces, who rarely took prisoners.Later, Barney was awarded the French Legion of Honour, but for seventy years he said almost nothing of his incredible war service - surviving two of the most dangerous battlefronts.