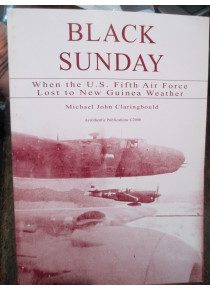 The title of the book refers to Sunday 16th April 1944 when the largest loss (caused by weather) of aircraft in the history of the United States Army Air Force took place.

While the crews carried out their mission, a massive frontal system blocked off their safe return home. That afternoon no part of New Guinea’s sky was still, every loss directly attributable to natural forces which dominated all outcomes. Dirty weather scored a clean kill over thirty-seven of the returning aircraft, making mockery of the carefully planned strike.

This book presents a combined compilation of the day’s history, revealing a fast-moving and unstoppable tragedy in which luck played a leading role.

The day and its aftermath epitomize the type of war for survival which the Fifth came to know so well. The day and its consequences are deserved of being finally put on the record after having been lost to history for more than seven decades.

The appendix list the names of airmen killed or missing on the day together with details about each of the aircraft lost.