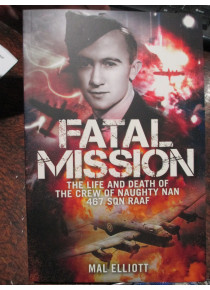 Fatal Mission is the story of Australian navigator Oscar Furniss, just one of 55,000 young men who perished while flying for Bomber Command during World War II. Lovingly crafted by his nephew, Mal Elliott, this book brings to life a young man whose name was never spoken by his family and who was a stranger to his modern-day descendants.

Elliott follows Oscar from his carefree childhood in the Blue Mountains through his training over the vast emptiness of Canada to the mist-shrouded patchwork landscapes of Britain and on to the hostile skies of occupied France. He uses the accounts of the two surviving aircrew to piece together the events of the fateful night that saw most of the crew of Lancaster JA901, affectionally know as Naughty Nan, perish as pilot Colin Dickson heroically manoeuvred his burning aircraft away from the towns and villages that dotted the landscape. This has been a difficult book for Elliott to write as it contains a harrowing description of his uncle’s last moments.

The terrible impact of the deaths of the aircrew are vividly described alongside the miraculous tales of the two survivors.