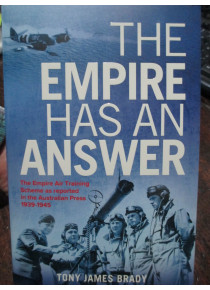 Importantly, this book provides a small coverage history of each of the RAAF Squadrons in England and the importance of the Empire Training Scheme to the Sqn.
﻿

Early in WW2 the British government put forward a plan to its old dominions to jointly train and make ready air crews ﻿for active service. The Empire Air Training Scheme was established﻿. Australia undertook to provide 28,000 aircrew over three years﻿.

By the end of the war, 37,576 Australian aircrew graduated from the Empire Air Training Scheme ﻿. Over 300 were killed whilst training for war and 9874 aircrew were killed or listed as missing while on active duty. Those who fought under this scheme during World War II amounted to just 6.7 per cent of Australian service personnel serving overseas yet the aircrew losses amounted to almost 25 per cent of all the Australian fatalities during the war. This made serving in  Empire Air Training Scheme﻿ among the most hazardous duties of the war.

'The Empire Has An Answer' book was researched using more than
35,000 articles, from 150 metropolitan, regional, and district newspapers, and what materialised was a story of one of, if not, the greatest training programs the world has seen.