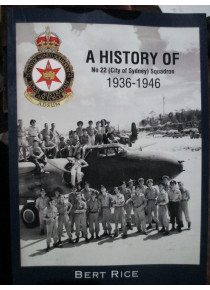 No. 22 (City of Sydney) Squadron was formed in 1936 as one of the five ‘City Squadrons'. For the first few years the unit flew Demons, Ansons and Wirraways from Richmond air force base, outside of Sydney.
In 1942 No. 22 Squadron became the only RAAF unit to be equipped with the Douglas A-20 Boston.

Arriving in Port Moresby in October 1942, the squadron began flying close-support missions for Allied troops battling the Japanese in the jungles of northern Papua. In March 1943 the unit participated in the decisive victory at the Battle of the Bismarck Sea.

On 18th March 1943 Flight Lieutenant William Newton's Boston was damaged by AA fire during a raid on Salamaua. He skilfully crash-landed the crippled aircraft, and he and a crewman were captured by the Japanese and executed soon afterwards. Months later, Newton was awarded a posthumous Victoria Cross, being one of only two awarded to members of the RAAF and earning No. 22 Squadron a special place in RAAF history (the other RAAF VC winner served with an RAF Bomber Command squadron).

No. 22 Squadron saw much hard fighting in New Guinea during the 1943-44, prior to moving to Morotai in the Netherlands East Indies where the Bostons were replaced by Beaufighters. In 1945 the unit saw action over Borneo, and after the end of the war moved to Deniliquin where it was disbanded in 1946.

This history has been produced by the No. 22 Squadron Association. The author, Sergeant Bert Rice, served with the squadron between 1940-44.