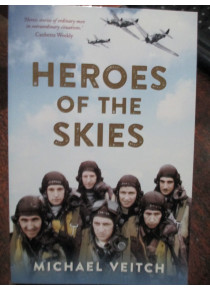 Heroes of the Skies by M. Veitch

The author has had a lifelong interest in the aircraft and airmen who fought in WW2.﻿ In this book he sets out to find the last Australian aircrew/pilots who served during World War II. These men have never had much written about them or their exploits during the war.

It was another time, John Crago a wireless operator air gunner with
622 Squadron said: "you always think of it, it never goes away, it's always there somewhere at the back of your mind, but you just get on with things", Murray Adams a fighter pilot who flew the famous Spitfire cited; "it's only now that fighter pilots like me are becoming an endangered species, that people like you are interested."
Regardless to say they are the 'Heroes of the Skies'.

The following Australian men were interviewed;