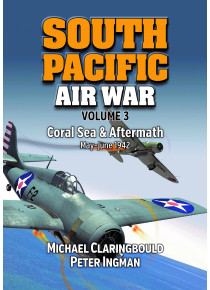 This book South Pacific Air War Volume 3 is the third part of this ever popular series, details the Battle of Coral Sea 4–8 May 1942 - often referred to as the sea battle that helped save Australia.
﻿
These books are noted for the expert detailed narrative together with some of the best illustrative art work to be found in a book for years.

The Battle of Coral Sea was a turning point during World War II in that it was the first time that the Japanese advance was halted.

Although technically the battle was said to be a draw. It was the first carrier versus carrier conflict of the war.﻿ The US Carrier Lexington, was lost and total killed for the Allied forces was 543. The Japanese, the battle losses included the carrier Shoho, one destroyer, and 1,074 killed﻿.

The Battle is followed in chronological date order, detailed narrative of the Battle are provided in 17 chapters, these are some of headings See pic above for contents page;
Tulagi Invaded
Morning Carrier Strikes May 7
Craces Ordeal
Hara's High-Stakes
USN Carrier a Strike May 8
IJN Carrier a Strike May 8
Defenses of New Caledonia, The New Hebrides, Fiji and Townsville.