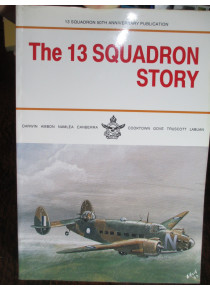 The 13 Squadron Story by Sid Grantham

The 13 Squadron Story by S. Grantham

History of the 13 Squadron RAAF, a scarce volume which also includes a brief history of the 13 City of Darwin Reserve Squadron reformed in 1989. In World War II, the Squadron was formed in Darwin in June 1940 with a detachment stationed at Ambon in 1941. Later being bombed by Japanese and  becoming POW.
The Squadron undertook reconnaissance activities in the northern coast of Australia. Being stationed at various times in Darwin, Cooktown, Canberra, Gove and Central Coast NSW. Flying﻿﻿ Beaufort and Ventura﻿ Bombers they were successful in antisubmarine operations. The Squadron ended the war at Labuan.﻿
Members roll included