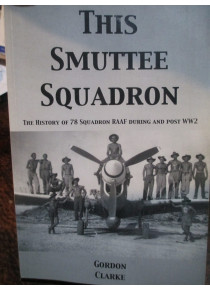 This Smuttee Squadron The History of 78 Kittyhawk Fighter Squadron

This Smuttee Squadron The History of 78 Squadron RAAF During anfd Post WW2 by G. Clarke

This book is the history of the 78 RAAF Fighter Squadron, Smuttee was the codename used by the Squadron after they joined the war in the Pacific, in 1943. They were formed in Camden NSW in July 1943.

For those few years before the end of the war, the Squadron accumulated an impressive list of Battle Honours.

A large book of some 500 pages which boasts 190 photographs related to the Squadron. The appendices include a Roll of Honour, The Pilot List, Ground Crew List, a list of aerial victories showing the plane type and the pilot accredited with the kill, list of commanding officers, men and aircraft disposition from the WW2 Operations Record Book, Aircraft Operated by the Squadron showing the Serial Number, model, the fate of the aircraft and the date.

Gordon Clarke, the son of a member of No. 78 Squadron RAAF
has meticulously researched and documented the history of this unique RAAF WWII Kittyhawk Fighter Squadron.

With over 190 rare WWII photographs and interviews of many members of No. 78 Squadron RAAF, “This Smuttee Squadron” is a MUST read 500 page publication.