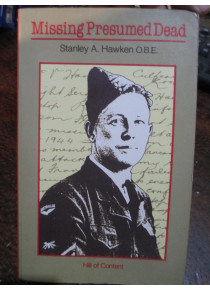 THe author was a Australian RAAF member who was a WAG Wireless  Airgunner in a Lancaster bomber.
After much training in Australia - attending No 3 Bombing and Airgunnery School at RAAF Sale .
He embarked via the Empire Scheme to USA. Later he become operational with 630 Squadron East Kirkby.
After many missions, he was shot down in 1944 and evaded capture.

This is his story