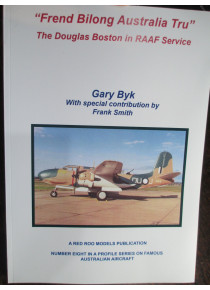 The Douglas Boston in RAAF Service

The Douglas A-20 Havoc is an American medium bomber, attack aircraft, night intruder, night fighter, and reconnaissance aircraft of WW2.

Near the start of WW2 in the Pacific,  22 Bostons due to be delivered to Dutch East Indies ﻿were diverted to the Royal Australian Air Force.

They served with No. 22 Squadron RAAF and fought in the East Indies from September 1942. RAAF Bostons took part in the Battle of the Bismarck Sea and in attacks on a large Japanese convoy headed toward Lae. Some A-20A/C/G planes arrived from the US from September 1943. By November 1944, No 22 Squadron was going to be assigned to the Philippines.

13 Bostons were destroyed on the ground during a Japanese raid on Morotai. The squadron was withdrawn to Noemfoor, where it was re-equipped with Beaufighters before it returned to action. Surviving Bostons were relegated to transport, mail delivery and communications﻿﻿