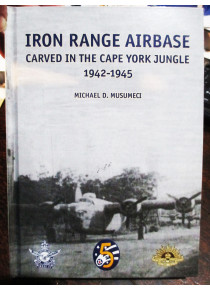 The book contains over 40 US and Australian stories, based on the life and times of the wartime base. The detailed narrative is supported with 300 photographs (many that have never been released) 7 maps and appendices.  Sections are included on the 'Then and Now', air crashes, Units that served, Veteran Recollections, and 55 53 Infantry Battalion of the base.

Without doubt the book is the most concise reference ever compiled on the Iron Range base. The base was occupied by both Australian and US Forces. The main aircraft unit was the US 5 Air Force Command﻿'s  90th Bombardment Group which arrived in Queensland in early November 1942 with their 48 B-24D Liberators. ﻿

The two airfields located at Iron Range were named 'Claudie' and 'Gordon'.  Major bombing missions commenced from these airfields on Japanese installations in Papua and New Guinea during World War 11.

There were several dramatic aircraft crashes in the vicinity of the Airbase and many brave men paid the ultimate supreme sacrifice.

May we suggest, this type of book, when out-of-print will become very expensive and highly collectible - as usual everyone wants the book after it is no longer available.﻿