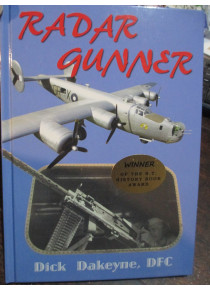 In 1942 Dick Dakeyne joined the ultra top-secret unit Section 22 (so named because it was run from Room 22 of General MacArthur’s Brisbane Headquarters).

Little has ever been written about this unit – Dick was trained to operate highly classified radar detection equipment installed on just a handful of aircraft. During regular bombing raids, his mission was to map out Japanese radar installations over enemy territory. His secondary mission was to operate a 50 calibre waist gun position in an American B-24 bomber.

Dick spent the war as a lone Australian RAAF member embedded with American Liberator bomber crews of the 380th Bomb Group operating from Fenton Field 140 km south of Darwin in Northern Territory Australia. This is a hugely interesting book illustrated by Dick’s wartime photo collection – including some incredible shots taken during combat missions. ﻿