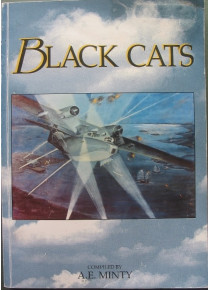 Black Cats by A E Minty

Black Cats : the real story of Australia's long range Catalina strike force in the Pacific War, Solomons to Singapore, Cairns to the coast of China.

Compiled by Flight Lieutenant Albert 'Bill' Minty who was a RAAF Catalina pilot during the war - his own service being 62 operational fights. As the title eludes, this book records the long distant missions of the Catalina Squadrons provided in personal refections of those who flew the missions.

RAAF 11 and 20 Squadrons flying the Catalina Flying Boats played a significant role in slowing the initial Japanese advance towards Australia in WW2. Operating from far northern mainland and island bases as emergency bombers and reconnaissance aircraft the Squadrons took part in many dangerous missions. Among missions detailed in the narrative include but not limited to:
Kau Bay, New Britain, Sepik River, Mine laying, the Manus Island missions, Balikpapan, Rabual, Manila Bay, China Coast, Makassar rescue.