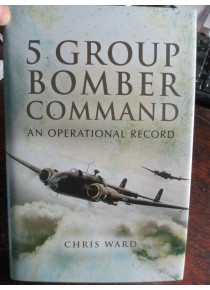 During the immediate period before World War Two, the RAF modified its command structure to rationalise for rapid expansion. Bomber Command was divided into six operational groups, each flying the same type of aircraft.

In 1939 5 Group was flying the Handley Page Hampden, a fast, modern aircraft that carried a large payload. However, during the early daylight raids into enemy occupied Europe it suffered great losses due to its defensive armament leaving too many blind spots. The Group now turned to night bombing and mine-laying operations. During November 1940, the first Avro Manchesters entered service but were to prove dangerously unreliable.

It was not until the Avro Lancaster began arriving in strength that the Group began its proud history of successful and often highly dangerous raids into the Reich, the most famous of which was No 617 Squadron's attack on the Mohne, Eder and Sorpe dams. Between 1939 and 1945 the Group flew 70,351 sorties with the loss of 1,888 aircraft. This book contains a lengthy narrative of the group's operations and contains individual squadron statistics, their commanding officers, stations and aircraft losses.
It provides a detailed reference for one of the RAF's most important and successful operational groups.﻿﻿