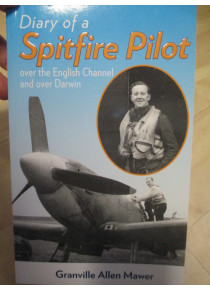 Diary of a Spitfire Pilot Over the English Channel and Over Darwin by A. Mawer

Allen Mawer's air war begins when he joins the RAAF and the Empire Training Scheme. In 1941 he was sent to 8 Elementary Flying School at Narrandera NSW - flying DH82 Tiger Moths.

From Australia he was posted to Canada where he seen his first Hurricane. Then he records his further training with 61 Operation Training Unit near London. He was allotted to 3 Squadron, a Spitfire Squadron, afterwards being transferred to 245 Squadron - flying Mk 2 Hurricanes.

His diary is a candid and sometimes disconcerting record of conquests in the air and on the ground. It recounts the highs and lows of his war. From 1941 when, aged 21, he hunted the Hun over the English Channel and experienced the perils of aerial combat and the hazards of wartime romance.

In 1943, he joined 54 Squadron in Darwin flying against Japanese zeros - the first time on the 15 March 1943. Living in a 'swamp that pretends to be an airstrip' Strauss south of Darwin, the Japanese flew over so infrequently he was in danger of going troppo.

Allen was killed over Darwin at the end of the war. His diary offers a poignant insight into the human cost of armed conflict.