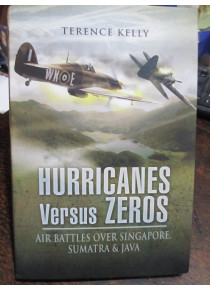 Hurricanes Versus Zeros﻿ Air Battles over Singapore Sumatra and Java by T. Kelly

The author, Terence Kelly was a Hurricane pilot during the fateful months of the Japanese advance and victory in Malaya and Singapore in early 1942.

In this enthralling book the author gives a vivid account of the air action fought by himself and his companions. Perhaps even more importantly he succeeds in painting a much wider canvas embracing the dramatic events leading up to the triumphant Japanese invasion of Singapore and the Dutch East Indies.

The use of many individual's testimonies is possible due to his having tracked down and interviewed those who fought alongside of him. He does not lose sight of the 'big picture' and he speculates controversially that defeat was not inevitable. This raises many questions of the quality of the Allied leadership and preparedness. He records not just the bravery of the defenders but the atrocities perpetrated by the victorious Japanese against combatants and hapless civilians.

Kelly was captured and spent the next three years in captivity both in Indonesia and Japan in a camp called Hiroshima 5, which was only twenty miles from the first atomic bomb attack.

Hurricanes Versus Zeros, which was initially published in 1985 as Battle for Palembang, is a lively and informative read for those who seek a better understanding of the disastrous collapse of Allied power in late 1941 and early 1942.