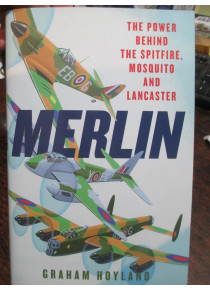 Merlin : The Power Behind the Spitfire, Mosquito and Lancaster

Merlin  The Power Behind the Spitfire, Mosquito and Lancaster: the Story of the Engine That Won the Battle of Britain and WWII by G Hoyland

The most iconic planes of WWII, the Supermarine Spitfire, Hawker Hurricane, DeHavilland Mosquito and the Avro Lancaster, were all powered by one engine, the Rolls-Royce Merlin.

The story of the Merlin is one of British ingenuity at its height, of artistry and problem-solving that resulted in a war-winning design.

Published to coincide with the 75th anniversary of VE Day and the 80th anniversary of the start of the Battle of Britain, Merlin is the extraordinary story of the development of the Rolls-Royce engine that would stop Hitler from invading Britain and carry the war to the very heart of Germany.