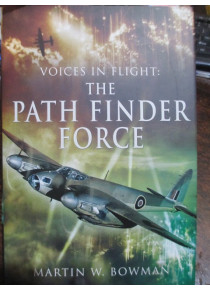 Voices in Flight Pathfinder Force By B Martin

Voices in Flight Pathfinder Force By B Martin

Charged with the formidable task of locating and marking German targets for attack by the main force of Bomber Command, the Path Finder Force - 8 (PFF) Group and those in 5 Group - was perhaps the most experienced and highly trained elite group created within the Royal Air Force during World War II.

Its aircrew members were almost entirely volunteers and despite the terrifying odds against any individual (or complete crew) ever completing the sixty-sorties tour of operations with the PFF, the most feared 'punishment' was to forfeit their coveted Path Finder wings and be posted away to other units. This remarkable evocation of a remarkable force is made up largely of narrative and photographs from the men who flew with or were an integral part of the PFF.

They alone are best qualified to recount the Path Finder story.While the subject matter herein largely covers the four-engined Stirlings, Halifaxes and Lancasters and twin-engined Mosquitoes of 8 (PFF) Group, the Path Finding techniques used by 5 Group are not forgotten﻿