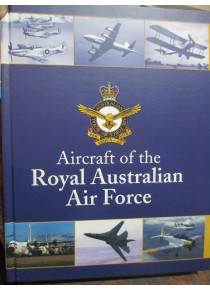 RAAF Aircraft of The Royal Australian Air Force up to 2021

Aircraft of The Royal Australian Air Force
by the RAAF

Aircraft of The Royal Australian Air Force tells the story of the RAAF’s first one hundred years by describing the acquisition, operation, and service record of the multitude of aircraft types flown by the RAAF.

The 176 aircraft types include the flimsy wood and canvas aircraft typical of World War I, through the technological advances during and after World War II, to modern fifth-generation, complex aircraft like the F-35 Lightning II.

A huge book weight near 3 kg ! Its not like the old RAAF anniversary editions, this edition has a large amount of detail on each aircraft and is well represented with detailed narrative and photos.