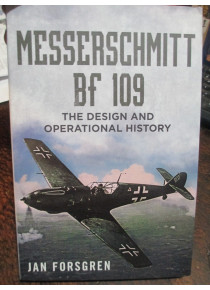 Messerschmitt BF 109 The Design and Operational History By J Forsgren

More than 33,000 Messerchmitt Bf 109s were built between 1935 and 1945, making it the second-most produced warplane of all time. Its baptism of fire was in Spain during the Spanish Civil War of 1936-39. The Bf 109 was the mainstay of Luftwaffe fighter squadrons, and the favoured choice of most of the Luftwaffe's fighter aces. Luftwaffe Bf 109 pilots accounted for thousands of Allied aircraft, with individual scores for some pilots reached hundreds of downed aircraft.

It saw service in Poland, the invasion of France and, of course, during the Battle of Britain in 1940. Although gradually becoming obsolete, the Bf 109 remained in large-scale production until the end of the war, and was supplied to more than ten countries, including Finland, Hungary, and Romania. After the war, development and production continued in Czechoslovakia and Spain as the Avia S-199 and Hispano Ha-1112 respectively, the latter powered by a Rolls-Royce Merlin engine. Incredibly, the state of Israel operated Czech-built Avia S-199s during its War of Independence in 1948-49.

Today, the Bf 109 is considered one of the greatest fighters ever produced. ﻿