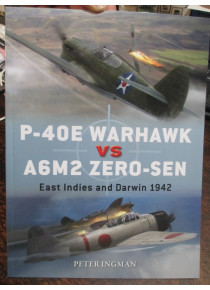 The story of the days in WW2 when the RAAF and Allies were fighting in skies over Northern Australia. The Australian pilots flying their Kittyhawks (aka P40 Warhawk) would duel against the Japanese Zero in the sky over Darwin. This account is portrayed by local Australian author Peter Ingram. Brought to life by superb Osprey illustrations. The Kittyhawk was the main fighter used by the RAAF in World War II, in greater numbers than the Spitfire. RAAF acquired 841 Kittyhawks (not counting the British-ordered examples used in North Africa), including 163 P-40E, 42 P-40K, 90 P-40 M and 553 P-40N models.

Step back onto the battlefield of Darwin 1942 when the question was 'P40E Warhawk vs A6M2 Japanese Zero' the result of which had dire consequences for Australia.