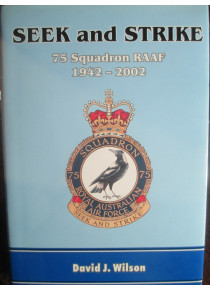 History of the 75 Sqn RAAF up to date of publish in 2002. Formed in 1942, to protect Australia from Japanese offensive. One of its most famous deployments during WW2, was to Gurney Field Milne Bay, where it operated with 76 Squadron in the defence of Milne Bay New Guinea.

Aircraft flown by the Squadron include:

The book has a nominal roll March to September 1942

Full Honour and Commanding Officer Roll. Aircraft register is included with one example colour art of each aircraft type flown.