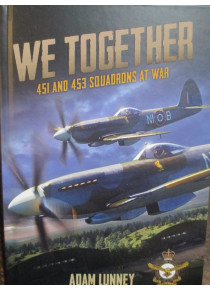 451 and 453 Squadrons at War RAAF Book WE TOGETHER Lunney

Adam Lunney's first book 'Ready to Strike' is the story of the 453 Sqn operating from airfields built immediately behind the front lines of the Normandy battlefield after the June 1944 D Day landings in France.

This book is the history of 451 Squadron, with the additional story of 453 Squadron only from September 1944.

The 451 and 453 (RAAF) Squadrons were both formed in 1941 at Bankstown NSW. The two Squadrons flew and fought until the end of the Second World War when both Squadrons were disbanded at Wunsdorf Germany in January 1946.

However each  Squadron's early service was quite different. While 451 was initially sent to the Desert Wars of North Africa and then equipped with Hurricanes. 453 was deployed to Sembawang Air Base Singapore, flying Brewster Buffalos against the Japanese. Although not recorded in this book, 453 Squadron pilots made gallant attacks in Malaya against the ever advancing Japanese. But they were hampered by the poor rate of climb and low speed of their obsolete American fighters.  Just before the Fall of Singapore what was left of the Squadron retreated to Java and then disbanded in Australia. 453 was later reformed in England in June 1942 re-equipped with Spitfires.

Later both 451 and 453 would join the war in Europe, flying sorties together against V2 sites and dive-bombing targets ahead of the Allied advance. There are moments of excitement, pain, suffering, fear, boredom and laughter. Many families of the pilots involved do not even know the full story of the squadron. This book is not just the history according to the official record, but is the history informed by all available sources.

The cover design depicts an attack by Sid Handsaker and Joe Barrington who flew together in 451 Squadron.

Best to buy this book now before it goes out of print, we see it time and time again escalating values of these unit histories once out of print.