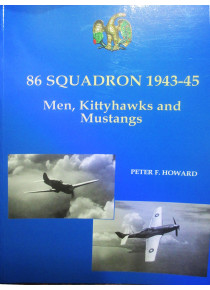 The author served as a pilot in RAAF 86 Squadron during 1945.

The book lists the names of some 900 men who served with the Squadron in 1943-45. The historical narrative is supported with 75 photographs of those times in WW2.

Short Wiki History of the Squadron

No. 86 Squadron was formed at Gawler, South Australia, on 4 March 1943 and was equipped with Curtiss P-40M Kittyhawk fighter aircraft. In May that year it moved to Townsville, Queensland, in May where it completed its training.

In early July 1943 No. 86 Squadron moved to Merauke in Dutch New Guinea to protect this base against Japanese air attack. Until this point the base had been protected by CAC Boomerang fighters of No. 84 Squadron flying out of Horn Island, but the completion of an airfield at Meruake allowed a Kittyhawk squadron to take on this duty. The decision to station a fighter squadron at Merauke was made in response to concerns that the Japanese could potentially attack and occupy the strategically located settlement, and the Australian Army garrison there was also expanded.[4] While there was generally little Japanese activity in the area by the time the squadron arrived, on 27 July sixteen No. 86 Squadron Kittyhawks were scrambled to intercept four Japanese aircraft which had been detected by radar. The Japanese aircraft were able to leave the area before the squadron could make contact with them, however. A force of 16 Japanese Mitsubishi G4M bombers and the same number of fighters raided Merauke on 9 September and were intercepted by 14 Kittyhawks from No. 86 Squadron. While most of the Kittyhawks suffered gun malfunctions and were unable to engage the Japanese, the squadron shot down two G4Ms and a Nakajima Ki-43 fighter without loss.

From September 1943, the RAAF units in the Merauke–Torres Strait area had little to do as few Japanese aircraft operated in the area. No. 86 Squadron next saw combat against Japanese aircraft on 22 and 23 January 1944 when it intercepted and destroyed two G4Ms and one Mitsubishi A6M Zero fighter near Cape Valsch; after these engagements the Japanese ceased sending aircraft into the Merauke area.

No. 86 Squadron also undertook other tasks in addition to its air defence duties. The squadron regularly conducted patrols of the Merauke area, escorted supply ships and exercised with Australian Army units. It also undertook several ground attack missions, including an operation on 31 January 1944 in which four Japanese barges were sunk in the mouth of the Lorentz River. The official history of the RAAF in this period notes that although the two squadrons on Merauke and Horn Island saw little action, they "fulfilled a very useful purpose" by protecting the flank of the Allied forces in New Guinea.