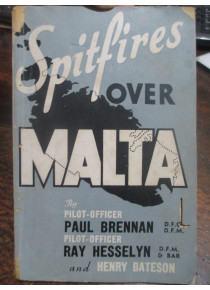 Brennan was an Australian pilot with 249 Squadron RAAF. He was awarded the Distinguished Flying Medal and Distinguished Flying Cross. Enlisting in the RAAF in 1940, he briefly served in the European Theatre before transferring to Malta. Over the next five months with the 249 Squadron he was officially credited with the destruction of 10 Axis aircraft from a total of 24 operational sorties. Transferred to England, he was assigned as a flying instructor. At which time, he collaborated in the writing of 'Spitfires over Malta', a book about his experiences on the island. Returning to Australia during 1943, Brennan was killed in a flying accident at Garbutt, Queensland, in June that year.

Ray Hesselyn was a New Zealander, who fought in the same squadron as Brennan. When they wrote this book, they had been on continuous service in Malta for four and a half months. For his gallantry he was Distinguished Flying Medal and Bar.

Their book was published in 1943 as a paperback, it is today a scarce book about the Australian and New Zealand operations in Malta.