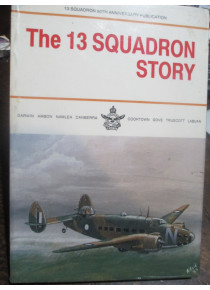 The 13 Squadron RAAF Story 50th Anniversary Book. 13 Squadron was formed at RAAF Base Darwin on 1 June 1940. The Squadron initially served in the general reconnaissance role and flew maritime surveillance patrols over the seas to the north of Australia and survey flights over northern Australia. The Squadron was severely affected by the Japanese air raids on Darwin on 19 February 1942, with the Squadron's headquarters, stores and spares being destroyed. As a result of the Squadron's heavy losses during the defence of and the raids on Darwin, 13 Squadron generally only had one or two aircraft operational on most days in early 1942