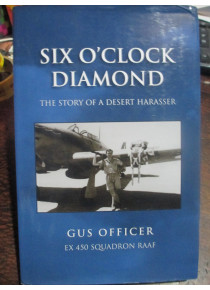 Six O’ Clock Diamond is the personal account of a young man from Warrnambool in Western Victoria who joined the Royal Australian Air Force in 1941. After training on Tiger Moths and Wirraways in Australia, he was sent to the Middle East where he
flew Hurricanes on Operational Training Units. Eventually he was posted to 450 Squadron RAAF ‘the Desert Harassers’ flying Kittyhawks against the Messerschmidt 109s of the Luftwaffe and the Macchi 202s of the Italian Air Force. Shot down on Melbourne Cup Day 1942 by Lieutenant Fritz Geisshardt and narrowly escaping with his life from a burning Kittyhawk by parachute, Gus was captured by the enemy and spent the rest of the war as a prisoner in Italy and Germany until his liberation by the Russians in April 1945.

Written nearly fifty years after the war ended, Gus’s recall of detail is astonishing and reveals a truly independent Australian spirit, particularly when dealing with authority. His story contains humour, frustration, sorrow at the inevitable loss of life and – above all – the exhilaration and pride of being a member of 450 Squadron. Gus’s descriptions of living conditions in a prisoner of war camp leave nothing to the imagination and the story of his liberation and trek westwards from the Elbe River to the Americans is a fascinating eyewitness account of the state of the Third Reich in April and May of 1945.