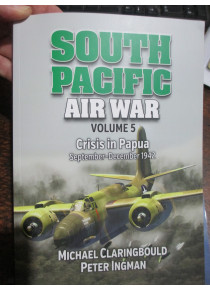 Volume Five of this series chronicles the aerial warfare which took place over Papua New Guinea, and close South Pacific in the period between September and December 1942.
The book follows the crisis unfolding in the Owen Stanley Range at Kokoda Efogi Ioribawa and the part undertaken by aircraft. Attacks on Rabaul, Buna Gona Sanananda are also well covered with available illustrations and detailed maps.
The period covered by South Pacific Volume 5 arguably saw the largest reversal in Japanese fortunes in the South Pacific since the beginning of the war. Early September witnessed the Japanese advance across the Kokoda Track towards Port Moresby and US marines struggled to hold onto Guadalcanal. However by the end of the year both campaigns were resolved in the Allies favor. Thus making the air war during this period crucial to the Allied effort..
The appendices show a list of Allied Aircraft losses during the period covered.