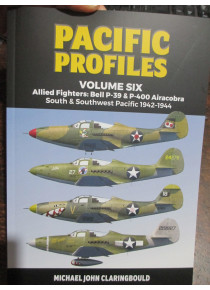 The Aircobra was used in a variety of roles including as fighters, dive-bombers and strafers. This aircraft bore the brunt of the Japanese onslaught against Port Moresby from May 1942 until P-38 Lightnings and U.S. P-40’s became available. The RAAF P-39’s first entered combat alongside 75 Squadron over Port Moresby on 6 April, 1942. The wide-ranging colourful heraldry and nose art of Fifth Air Force Airacobras is partly explained by the frequent trading of particular airframes between units. Until now there has been a paucity of information about the markings of Thirteenth Air Force Airacobras, and this volume fills much of this wide gap. The first and last Airacobras lost in the theatre are illustrated, along with rare markings of a night fighter and a P-39 used by Fifth Fighter Command.