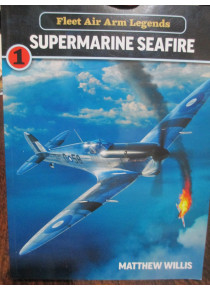 Renowned naval aviation author Matthew Willis tells the story of the Supermarine Seafire - a navalised version of the famous Spitfire adapted for use on aircraft carriers. Some 2646 examples were built and saw action with the Royal Navy's Fleet Air Arm from November 1942 until after the Korean War in the early 1950s.

The fighter was involved in combat during the Allied landings in North Africa (Operation Torch), the Allied invasions of Sicily and Italy, the D-Day landings, and Operation Dragoon in southern France. With the Pacific fleet, the Seafire proved capable of intercepting and destroying the feared Japanese kamikaze attack aircraft.