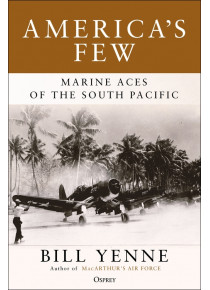 In the South Pacific during World War II, the aviators of the US Marine Corps came out of the shadows to establish themselves as an air force second to none. During the war, the number of Marine squadrons mushroomed from 13 to 145. The centerpiece of the action was in the Solomon Islands and adjacent archipelagos, from Guadalcanal to Bougainville and beyond.

PART I: ORIGINS
1: Marine Corps Aviation from Flanders to Wake Island
2: Who They Were
3: Taking to the Air
4: First Combat

PART II: THE FEW
5: That Place Called Guadalcanal
6: First Blood
7: New Blood
8: Changing of the Guard
9: The Coach Takes the Field
10: Joe Foss Takes the Lead
11: Tipping Points
12: Matching the Ace of Aces
13: The Long Season of the Dancing Bears

PART III: NO LONGER A MERE FEW
14: The Corsair and the Changing Game
15: Corsair Aces Over the Solomons
16: Slow Rolls and Victories Over the Slot
17: The Ace and the Albatross
18: Finding Their Momentum
19: A Wanderer in the Wings
20: The Black Sheep Go to War
21: Three Aces Reach Double-digits
22: The Major Leagues
23: Two Squadrons Over Kahili
24: Cherry Blossom Over Bougainville
25: Two Aces Over Rabaul
26: Everything They Had Left
27: At the Top of Their Game
28: The Ending of Eras

PART V: POSTWAR LIVES
32: In War and Peace
33: The Black Sheep and the Governor
34: Final Flights