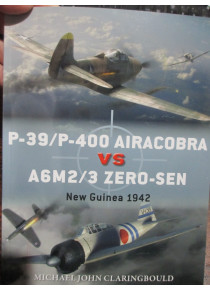 The author Michael Claringbould was raised in Papua New Guinea, where he developed his fascination for the Pacific air war, wrecks and relics from the period. During a career in the Australian foreign service he undertook postings across Oceania and the Pacific. He is author of three books on the USAAF Fifth Air Force: The Forgotten Fifth, Forty of the Fifth and Black Sunday, and co-author of Eagles of the Southern Sky, a history of the Tainan Kaigun Kokutai in New Guinea, Pacific Profiles and South Pacific Air War series

In this book, he utilises his vast knowledge and historical records to conduct a study of the historical dogfights between the Airacobra and the Japanese Zero. The reader travels back in time to 1942 when Australia and America threw in a last ditch effort to thwart the Japanese advance. To accomplish this many dogfights were fought between Japanese Zero and the allied P39 Airacobra.