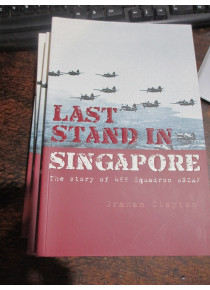 488 (NZ) Squadron was formed on 1 September 1941 at Rongotai, New Zealand under Squadron Leader Wilfred Clouston, a veteran of the Battle of France and Battle of Britain with nine victories to his credit.

The squadron was one of several Commonwealth squadrons (Empire Training Scheme) equipped with Brewster Buffaloes, and arrived at Kallang Airfield Singapore in November 1941. Frequent air battles over Singapore occurred from 12 January 1942, the Japanese pilots being better trained and outnumbering the defenders. The squadron received nine Hawker Hurricanes at the end of January to partially replace the shot down Buffaloes, but by 31 January, losses and the ground situation forced a withdrawal to Palembang, Sumatra and a few days later to Tjililitan airfield, near Batavia, Java, where Dutch East Indies Buffalo squadrons were facing a similarly unequal fight.

Clouston handed over command to Squadron Leader John MacKenzie and stayed with remaining staff to become a prisoner when Singapore fell.

On 23 February, the squadron evacuated Java, to Fremantle in Australia where it disbanded on 2 March.

This their story - The Last Stand in Singapore