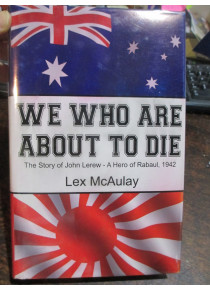 John Lerew commanded 24 Squadron RAAF at Rabaul in January 1942, equipped with modified airliners and training planes. His squadron lasted seven minutes against an overwhelming Japanese air armada. When he asked for modern fighters, he was told that there were none but he was to attack. He then sent the Roman gladiator's salute to HQ: 'We who are about to die salute you.'

When ordered to hand over his men to be used as infantry in the hopeless sacrifice against the Japanese invasion force, and return alone to Townsville, Lerew ignored it and organised and led the successful escape of his squadron to New Guinea. He later made a miraculous escape from his blazing bomber over Gasmata, and returned to New Guinea. Later again, Lerew commanded the biggest RAAF depot in Australia, and established the Directorate of Flying Safety. In 1946 he joined the International Civil Aviation Organisation, the quiet achievers who made possible safe standardised international airline operations.

This is his story. - 205 pages relate to his WW2 experiences in the RAAF