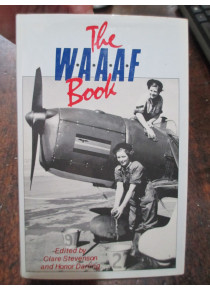 The WAAAF Book ' by Stevenson and Darling﻿, used book printed 1984

The WAAAF Book ' by Stevenson and Darling. Both Authors served with the WAAAF in WW2. This is the story of The Women's Auxiliary Australian Air Force formed in 1941. No longer were women restricted to voluntary support and nursing roles. 27000 women served in the WAAAF working in 72 of the 120 RAAF trades. WAAAF also carried out duties in Papua New Guinea and Solomon islands despite the official ruling that they go no further north than Cairns.

The WAAAF Book shows the sex discrimination of the times, hostility﻿ of some male Officers to women holding status. Has the reminiscences from many other ex-WAAAFs, portrays a vivid picture of comradeship and achievement of the WAAAF.

Heaps of printed photos and strong on detail should be a sort after book by medal collectors.