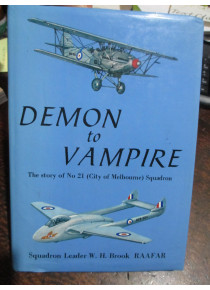 $79.00
Demon to Vampire – The Story of No. 21 (City of Melbourne) Squadron
21 Squadron was formed at RAAF Station Laverton on 21 April 1936, as a Citizen Air Force (reserve) squadron. Following the outbreak of World War II, the squadron was mobilised and its personnel placed on full-time service. The tempo of training increased as the squadron was brought up to strength and prepared for its first operational missions. In August 1940, the squadron was dispatched to Seletar, on Singapore, where it operated its Wirraways in support of ground forces that had been stationed there amid concerns of war with the Japanese. After the Fall Of Singapore, in September 1943, 21 Squadron was re-formed at Gawler, South Australia, and re-equipped with Vultee Vengeance dive-bombers. In November the unit moved to Lowood, Queensland, for advanced training. In January and February 1944 the squadron transferred to Nadzab in New Guinea to undertake operations.
The history of the Squadron continues right up to 1986 the time of publication.