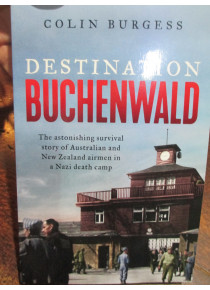 $34.00
Destination Buchenwald The astonishing survival story of Australian and New Zealand airmen in a Nazi death camp By C Burgess
168 airmen – including several from Australia and New Zealand – were transported on a filthy, overcrowded nightmare train journey which ended at the notorious Buchenwald concentration camp, accompanied by orders for their execution. At Buchenwald they witnessed extreme depravity that would haunt them to the end of their days. Yet, on returning home, they were confronted by decades of denials from their own governments that they had ever been held in one of Hitler’s most vile concentration camps.