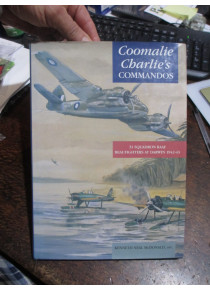 $165.00
Coomalie Charlie’s Commandos – 31 Squadron RAAF Beaufighters  by K N McDonald
RAAF 31 Squadron, unit history book. The Squadron was formed in August 1942 and disbanded in July 1946 after seeing action against the Japanese in the South West Pacific theatre of World War II. During the war, it operated the Bristol Beaufighter, which it operated in long-range fighter and ground-attack missions. Its first active posting was to Batchelor Field, Northern Territory in the defence of Darwin and offensive sorties in Timor Sea region and East Indies. As the war moved north the Squadron island hopped until Tarakan in May 1945, where 31 Squadron carried out strikes in support of the Australian landings in Borneo and Brunei .