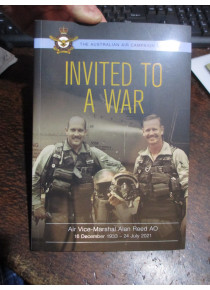 The life of Air Vice-Marshal Alan Reed AO is one that reads like a history of the RAAF post WW2. From humble beginnings as a National Service trainee in Perth in 1952, Alan’s career took him from propellor to the jet age - all the way to the rank of Air Vice-Marshal.

Along the way Alan flew a wide variety of RAAF aircraft and took part in many operations.  By the end of his RAAF career in 1990 he had flown most frontline RAAF aircraft of the cold war period - from training on the Tiger Moth and Wirraway, he progressed then to the Lincoln, Canberra bomber, Vampire, Sabre, Mirage, Macchi, the F-4E Phantom and the F-111. His experiences were many but his most lucky was fortuitously being removed from a doomed Lincoln flight that crashed into Mt Superbus in South-East Queensland killing all onboard - he provides a great personal reflection about the crash. He flew a 24-day around the world trip in a Canberra formation, and he had the opportunity to fly both the Phantom and the F-111C in RAAF service.

Alan was also privileged to be one of only six RAAF pilots to fly Phantoms while he was on exchange with the USAF during the Vietnam War, where he flew over 100 reconnaissance missions during a 179 temporary duty assignment, being awarded the USAF Distinguished Flying Cross.

This book profiles the life and times of a RAAF pilot during the Cold War period. Alan's first-person narration not only provides his details of flying the different aircraft but also of the people he met and air force bases - Pearce, Cunderin, Archerfield, Uranquinty, Townsville, Amberley, Butterworth, Point Cook to name a few.

The detailed text is supported with numerous photos including colour profiles of aircraft flown.

The book would be of high interest to those who served in the RAAF in the period 1952-1990.