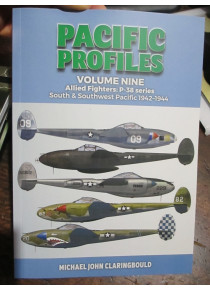 Michael Claringbould is world-renown for his expertise on the Pacific air war. Never before have Pacific P-38 Lightning's and their colourful derivatives been illustrated with such accuracy and detail. An important collectable book for all researchers of WW2, highly regarded by modellers, gamers and diorama enthusiasts.

Pacific Profiles Volume 9 details the Lockheed Lightning and variants, includes the photo-reconnaissance F-4 and F-5, along with field-modified P-38G night-fighters. The P-38 flew combat in the SWPA and SOPAC theatres until mid-1944, serving in a total of nineteen Fifth and Thirteenth Air Force USAAF combat squadrons, one service squadron, Fifth Fighter Command, and finally with the Combat Replacement Training Center at Nadzab.
Most profiles are presented for the first time, alongside an explanation of markings, including squadron heraldry and squadron codes. Until now there has been a paucity of accurate information about some markings, especially those which attend the Thirteenth Air Force, night-fighter and photo-reconnaissance units.


Click to see the full range of Pacific Profiles books


The P-38 was used most extensively and successfully in the Pacific Theatre, where it proved more suited, combining exceptional range with the reliability of two engines for long missions over water. The P-38 was used in a variety of roles, especially escorting bombers at altitudes of 18,000–25,000 ft (5,500–7,600 m). The P-38 was credited with destroying more Japanese aircraft than any other USAAF fighter. Freezing cockpit temperatures were not a problem at low altitude in the tropics. In fact, the cockpit was often too hot since opening a window while in flight caused buffeting by setting up turbulence through the tail plane. Pilots taking low-altitude assignments often flew stripped down to shorts, tennis shoes, and parachute. While the P-38 could not out-turn the A6M Zero and most other Japanese fighters when flying below 200 mph (320 km/h), its superior speed coupled with a good rate of climb meant that it could use energy tactics, making multiple high-speed passes at its target.