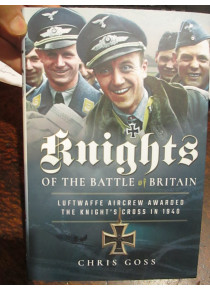 Knights of the Battle of Britain - Luftwaffe Aircrew 1940

$40.00
Knights of the Battle of Britain - Luftwaffe Aircrew 1940 by C Goss
Knight's Cross german WW2 medals were made of pure silver which was marked '800'. The award was made by a number of German manufacturers. On 3 June 1940, the Ritterkreuz des Eisernen Kreuz mit Eichenlaub (Knights Cross with Oak Leaves) was instituted, by which time 124 Rittterkreuz had been awarded to all arms of the German military, of which forty-nine had been awarded to Luftwaffe personnel. The first recipient was Generalfeldmarschal Hermann Goring on 30 September 1939; the first Luftwaffe operational Luftwaffe aircrew member recipient, and the fifth overall, was Oberst Robert Fuchs, Kommodore of Kampfgeschwader 26. His award was made on 6 April 1940.

The first fighter pilot to receive the Ritterkreuz was Hauptmann Werner Molders of III Gruppe/Jagdgeschwader 53 (III./JG 53) on 29 May 1940. Only three Luftwaffe officers would receive the Ritterkreuz mit Eichenlaub in 1940, and all of them were fighter pilots Molders on 21 September 1940 (he was then Geschwader Kommodore of JG 51), Major Adolf Galland (Kommodore of JG 26) on 24 September 1940, and Hauptmann Helmut Wick (Kommandeur of I Gruppe/JG 2) on 6 October 1940.

Throughout the summer of 1940, many more Luftwaffe members, be they serving on fighter, bomber, dive bomber or reconnaissance units, would receive the Ritterkreuz. Some of these awards were made posthumously, whilst others would learn of their awards whilst a prisoner of war in Britain or, later, in Canada.