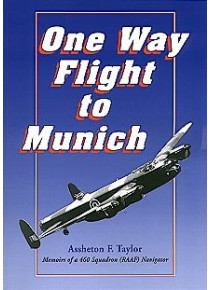 One way flight to Munich Flying WITH 460 SQUADRON AND LIFE AS A POW
By A. F. Taylor : new book

Assheton Taylor's personal memoirs of his W.W.2 experiences including service with the Sydney University Regiment, R.A.A.F. and advanced training in the U.K. Finally posted to No.460 R.A.A.F. (Lancaster) Squadron, Binbrook, as Navigator, in a substantially Australian crew. During a night raid on Munich, Germany on 2 October 1943 Assheton's Lancaster was attacked by night fighters over the target area. Within minutes of attack the aircraft exploded with 4 crew members, including Assheton, still inside the aircraft. Book graphically describes Assheton' s capture, interrogation and solitary confinement in Dulag Luft, Frankfurt as a spy and saboteur, prior to transfer as a P.O.W. to Stalag IVb .East Germany. After liberation. he escaped from Russian "custody" and crossed the Elbe River to the safety of the American zone on the West Bank, prior to repatriation to the U .K. and Australia.