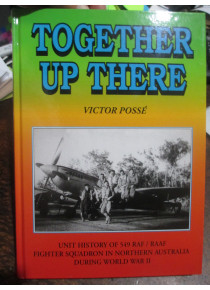 Together Up There History of 549 Raf / RAAF Squadron in Northern Australia by V. Posse : new book

' Together Up There History of 549 RAF / RAAF Squadron in Northern Australia During WWII ' by V. Posse : new book.

With the success of the Japanese conquest of the Pacific during 1941 and the air attack on Darwin a Japanese landing in Australia was imminent. Hasty deals were conducted between world Governments. Australia made arrangement with Britain to promise to send a RAF Fighter Wing equipped with Spitfires to help defend Australia against the looming 'Rising Sun'. Britain was keen to retain the 15000 RAAF personnel already serving in that country.

Two Squadrons 452 and 457 were sent to Australia in 1942. They were largely Australian flown British Based 'RAAF' Sqns. Britain was reminded that they had promised a Fighter Wing. It was decided to form 548 and 549 in Australia from RAF trained pilots being shipped out via USA. Ground Crew was supplied by the RAAF. The 549th was actually formed at Lawnton north of Brisbane where they flew Wirraway and Tiger Moth aircraft waiting the arrival of their Spitfires MKVIII .

In May 1944 the Spitfires arrived and the 549th were fitted out at Amberley still Australia's largest RAAF Base . The Spitfires were needed for interception missions against the Zero as the Kittyhawk's performance was not up to the task. The 549th was operationally active at Darwin regional bases. Main bases being Strauss Airfield part of the famous "The Track " airstrips and Parap strip - Darwin civil aerodrome.

Nice explanation and map in the book about the operational history of these largely forgotten airfields, The Beaufighter field at Coomalie Creek (now privately owned airfield), USAAF Livingstone Field ( still largely intact at time of printing), Hughes Hudson Bomber B25 Field ( still intact), others mentioned include Sattler, Batchelor, Gould Pell etc. The 549th formed a detachment at Truscott Airfield WA. They latter operated in Timor before being disbanded on 31st October 1945 at Melbourne.

Initially, the author's interest in the 549th began with family history from which he researched his cousin, Ronald Walter Posse, who had been killed in a flying accident while serving with the 549 Sqn in the Northern Territory . Excellent written book produced to a high standard - heavy pictorial hardboards high quality paper.

The author's work is supported by many period photo's and 'then now' pictures of veterans returning to the fields in 1988, a detailed register of all Australia's spitfire see pics, detailed History of Truscott Airstrip, Period Pilots' notes for Spitfire Mk VII VIII, Nominal Roll with name index completes this valuable addition to Australia's RAAF History.