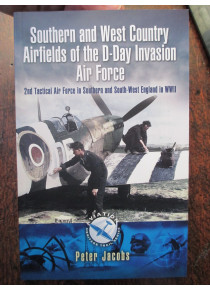 As part of the Aviation Heritage series, this book examines those airfields in the South and South West involved in the massive D-day operation to liberate Nazi-occupied Europe. Among the airfields featured are the famous names of Tangmere, Merston, Ford, Perranporth, Selsey and Bognor Regis.,

As part of the Aviation Heritage Trail series, the airfields and interest in this book are concentrated in a particular area – in this case West Sussex, Hampshire, Dorset, Wiltshire and Cornwall. The South and South-west of England emerged from six years of war with a rich diversity of RAF bomber and fighter airfields used by the 2nd Tactical Air Force, both before and after the D-Day landings. Much of this proud legacy is now threatening to disappear. However, the tourist can combine visits to an abundance of disused and active airfields, country houses and museums with countless attractions, imaginative locations and broadland and coastal hideaways that have no equal. The airfields and other places of interest include Hartford Bridge, Lasham, Westhamptonett,Merston, Odiham, Holmsley South, Funtington, Hurn, Ford, Tangmere, Ibsley, Perranporth, Thruxton, Thorney Island, Appledram, Selesy,Needs Oar Point, Zeals, Lee-on-Solent and Bognor Regis. This book looks at the history and personalities associated with each base, what remains today and explores the favourite local wartime haunts where aircrew and ground crew would have sought well-deserved entertainment and relaxation. Other museums and places that are relevant will also be described and general directions on how to get them included. ﻿