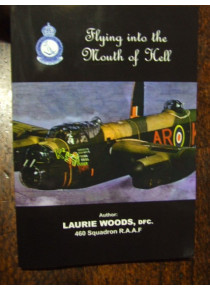 460 Sqn RAAF WW2 Flying into the Mouth of Hell

Flying into the Mouth of Hell By Laurie Woods DFC :new book

The story of my Royal Australian Air Force service culminating in a tour of operations against the enemy, whilst an aircrew member on the Australian Lancaster 460 squadron immediately following the invasion of Europe by the allied forces. In the first three months following the invasion the aircrew casualties of Bomber Command exceeded those of the invading ground forces. Dedicated to the aircrew of Bomber Command, and to all those mates who did not return, who served in the forefront of the war against the enemy for six long years, in which the squadrons were never withdrawn from operations. These young Australian men, some of the cream of their generation, were all volunteers who although not their war were prepared to go to the other side of the World to fight for freedom and for the right of other people in other lands to enjoy the freedom which we Australians value so very highly…﻿