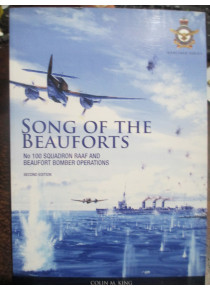 Song Of The Beauforts No 100 Squadron RAAF by C King; new book

This book records the exploits of the airmen of the first Australian Beaufort squadron in action in World War II.
Developed as a torpedo and general reconnaissance bomber, the Beaufort was the heaviest, most powerful and most complex aircraft ever built in Australia (at that time). It entered service with the Royal Australian Air Force at a time when Japanese invasion seemed imminent A later variant of the Beaufort was of course the Beaufighter.

As the tide of the war in the South-West Pacific turned from one mostly fought over the ocean to a land-based operation, the original squadron was joined by additional Beaufort units to form the RAAF's No 71 Wing.

Employing new methods of warfare, the Beaufort crews closely supported American and Australian ground forces. Using participants' own words to describe events, from the hazards of training to the fury of offensive operations, the author vividly brings to life the bravery of the aviators and the dedication and skill of the ground crews who operated Beauforts during the protracted campaign across the South-West Pacific.