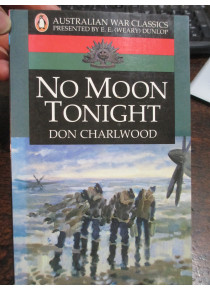 'I Remember the Bomber Command crews as if the drama had been yesterday.
I remember them as eternally young.'
Don Charlwood 1986

No Moon Tonight ' by D Charlwood. The author was an Australian who crewed up with a pilot from Western Australia and a British crew to fly a Lancaster bomber as part of Bomber Command. His experiences as a bomber crew member is a remarkable tribute to the thousands of Australians killed in action during raids.
Penquin Australia Publishers nominated this book as an Australian War Classic. Some 9000 Australians flew with Bomber Command, Charlwood with vivid and meticulous authenticity records the daily life of the airmen.
He should know he was there!